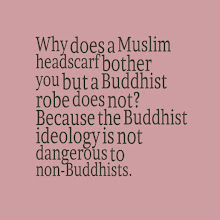 When I was a kid, I never saw Islamic-style headscarves worn by anyone in my town. I first saw one a few years ago. Now I see them all the time. And it bothers me. Does that make me a racist?

People all over the free world are seeing the same thing, and are feeling disturbed by it. Concerned. Frightened even. Does that mean we are xenophobic bigots? The answer is no. I'm sure there are racist xenophobes among us, but for those of us aware of Islamic ideology and Islamic history, the reason we are uncomfortable with a growing number of Muslims in our midst is simple and reasonable: It has traditionally spelled doom for the existing culture. Islam annihilates cultures.

Islamic headscarves are indicative of ideology. If a Muslim woman believes in Islamic ideology, she will wear a headscarf. A headscarf is one of the few publicly visible signs of Islamic devotion. And if she believes in Islamic ideology, she will probably have lots of children and indoctrinate her children with the ideology too (Islamic texts encourage fecundity and indoctrination). And Islamic ideology is dangerous to non-Muslims. The higher the percentage of Muslims in a given population, the more dangerous they are (because of Islam's rule of numbers).

And I'm not a racist. If I saw more and more Japanese people in my town, it wouldn't disturb me at all.

It's the ideology. Anyone who understands what it says in Islamic texts should be concerned at the growing number of Muslims in our midst.