Hundreds of Americans Were Captured and Enslaved 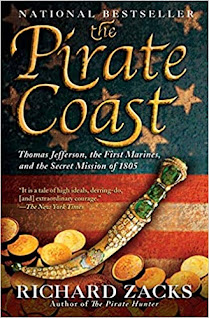 The following passages are excerpted from the excellent book, The Pirate Coast: Thomas Jefferson, the First Marines, and the Secret Mission of 1805, by Richard Zacks:

In 1801, just after the inauguration of Thomas Jefferson, Tripoli (modern-day Libya) had become the first country ever to declare war on the United States. The ruler, Yussef Karamanli, had ordered his Janissaries to chop down the flagpole at the U.S. consulate to signal his grave displeasure with the slow trickle of gifts from America. Jefferson, when he learned the news, had responded by sending a small fleet to confront Tripoli and try to overawe it into a peace treaty.

For more than two centuries, the Barbary countries of Morocco, Tunis, Algiers, and Tripoli had been harassing Christian ships, seizing cargo and capturing citizens. Algiers once boasted more than 30,000 Christian slaves, including one Miguel Cervantes, before he wrote Don Quixote. European powers in the 1500s and 1600s fought ferocious battles against Muslim pirates like Barbarosa. However, over time, a cynical system of appeasement had developed. The nations of Europe paid tribute — in money, jewels, and naval supplies — to remain at peace. England and France — in endless wars — found it cheaper to bribe the Barbary pirates than to devote a squadron to perpetually trawling the sea off Africa. At its core, expediency outweighed national honor.

When the thirteen American colonies split off from mother England, they lost British protection. The United States found itself lumped in the pile of potential Barbary victims, alongside the likes of Sardinia and Sicily. (From 1785 to 1815, more than six hundred American citizens would be captured and enslaved. This nuisance would prove to be no mere foreign trade issue but rather a near-constant hostage crisis.)...

In colonial days, preacher Cotton Mather had described Barbary slaves as living for years in dug-out pits with a crosshatch of bars above... Galley slaves also lived to tell of being chained naked to an oar, forced to row ten hours at a stretch. Slaves, facing forward, pushed the forty-foot-long oars by rocking back to near horizontal, as though in a grotesque limbo contest, and then lurching with full strength, again and again. During hard chases, they were sustained by a wine-soaked rag shoved in their mouths...

Rituals varied, but in one account (of a North African slave auction) an American stated that after being purchased: "I was forced to lie down in the street and take the foot of my new master and place it upon my neck." Another described being forced to lick the dust along a thirty-foot path to the throne of the Dey (king) of Algiers.

John Foss survived captivity in Algiers, and his popular account ran in several American newspapers in the late 1790s, fleshing out the nightmare. He wrote of prisoners (Americans who had been captured on American ships and enslaved) routinely shackled with forty-pound chains, forced to perform sunrise-to-sunset labor ranging from digging out sewers to hauling enormous rocks for the harbor jetty. He matter-of-factly described the most common Barbary punishment for light infractions: bastinado of 150 strokes: "The person is laid upon his face, with his hands in irons behind him and his legs lashed together with a rope. One taskmaster holds down his head and another his legs, while two others inflict the punishment upon his breech (his buttocks) with sticks, somewhat larger than an ox goad. After he has received one half in this manner, they lash his ankles to a pole, and two Turks (Muslims) lift the pole up, and hold it in such a manner, as he brings the soles of his feet upward, and the remainder of his punishment, he receives upon the soles of his feet."

The Philadelphia was captured in 1803 by Tripoli. The Americans onboard the beautiful 1,200-ton American frigate were captured too, most of them enslaved.

The loss of the Philadelphia and its 307 crewmen and officers on Kaliusa Reef in Tripoli harbor marked a national disaster for the young United States. The Bashaw (king of Tripoli), a wily and worthy adversary, would set his first ransom demand for the American slaves at $1,690,000, more than the entire military budget of the United States.

Navy officers like the fierce Captain John Rodgers would beg for the chance to attack Tripoli to avenge and free his comrades; diplomats such as Tobias Lear, a Harvard graduate, yearned for the glory of negotiating their release. But the man who would one day speed their freedom more than all others was a stubby disgraced former army officer on his way to the nation's new capital, Washington City.

Here's a quote by William Eaton (the stubby former army officer mentioned above): "If the Congress do not consent that the government shall send a force into the Mediterranean to check the insolence of these scoundrels and to render the United States respectable, I hope they will resolve at their next session to wrest the quiver of arrows from the left talon of the American Eagle...and substitute a fiddle bow or a cigar in lieu."

Eaton also said, "Let my fellow-citizens be persuaded that there is no borne limit to the avarice of the Barbary princes; like the insatiable grave, they can never have enough. Consign them the revenues of the United States as the price of peace, they would still tax our labors for more veritable expressions of friendship. But it is a humiliating consideration to the industrious citizen, the sweat of whose brow supports him with bread, that a tithe from his hard earnings must go to the purchase of oil of roses to perfume the pirate's beard!

"It is true that Denmark and Sweden (and even the United States, following their example) gratuitously furnish almost all their materials for ship-building and munitions of war; besides the valuable jewels and large sums of money we are continually paying into their hands for their forbearance, and for the occasional ransom of captives...Without these resources they would soon sink under their own ignorance and want of means to become mischievous. Why this humiliation? Why furnish them the means to cut our own throats?"

After the crew of the Philadelphia was enslaved, the captives were hoping the U.S. government would pay their ransom and bring them home.

Everyone knew that ransom might take months or years, but they also knew that there existed a simple way for the men to become free immediately, and that was to convert to Islam. Less than three weeks into captivity, John Wilson, a quartermaster born in Sweden, decided to "turn Turk" (convert), as did Thomas Prince, a seventeen-year-old from Rhode Island. Three more Americans would follow them.

The officials of Tripoli, who encouraged and allowed the religious conversion, took the matter seriously. Since the Koran forbids Muslims from enslaving Muslims, a conversion meant freedom from slavery. As Ray put it, "Thomas Prince was metamorphosed from a Christian to a Turk." His choice word metamorphosed was quite apt. Not only did the ritual involve words of faith and promises to perform new rituals, but also a change of clothes and that inevitable loss of foreskin. While circumcision is not mentioned in the Koran (as it is in the Old Testament, Genesis 17:11), the rite became sanctified by Muslim theologians as far back as the seventh and eighth centuries.

William Eaton and seven U.S. Marines organized and led a group of thousands of enemies of the ruler of Tripoli and captured the second biggest city in the country, making the ruler willing to negotiate a treaty and return the captured Americans. A few years later, the American navy became powerful enough to put a permanent end to the Muslim capture of American ships in the Mediterranean.

The above (except what's in italics) was excerpted from the book, The Pirate Coast, by Richard Zack.