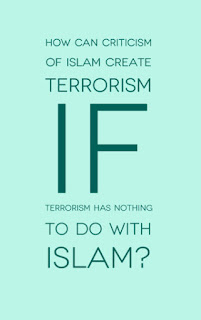 The headline and the above paragraph are fiction. This was a way to illustrate how ridiculous it is for any non-Muslim to criticize anyone for holding a Muhammad cartoon contest.

In Islam, it is not okay to draw Muhammad or satirize Islam. Fine. Muslims shouldn't do it. But should that rule be applied to everyone, whether they are Muslim or not?

In the same way, if it is a sin for a Scientologist to criticize Scientology (and it is) a non-Scientologist can do it if they want to. We all know this. A person who is not a member of the religion can criticize it all they want. None of us are bound by the rules of a religion of which we're not a member. Obviously. Right? It should be obvious.

It used to be a Catholic rule that Catholics were not supposed to eat meat on Friday. In some places in the world, this rule is still in effect. Fine. Non-Catholics don't care, and don't worry about whether they eat meat or not on Fridays. But what if Catholics became offended when anyone ate meat on Fridays? What if they started killing non-Catholics who were found eating meat on Fridays? Would the pundits say the meat-eaters had it coming? Would they say that by having a hamburger barbeque in their backyard, they were obviously provoking the Catholics and got what they deserved? That would be ridiculous. Right?

What if they weren't just innocently and quite-by-accident having a hamburger barbeque, but knew Catholics didn't like it, and to prove they had the right to eat what they want, they went ahead and ate the burgers anyway? And then Catholics killed them for it? Now did they get what they deserved? Should they be criticized for provoking the Catholics? No. The Catholics are the ones to be criticized, and the rule that non-Catholics should follow Catholic rules — that is what should be criticized. Obviously.

What ought to be criticized is the Islamic rule that non-Muslims must follow Islamic rules.