What's the Difference Between a Habit and a Headscarf? 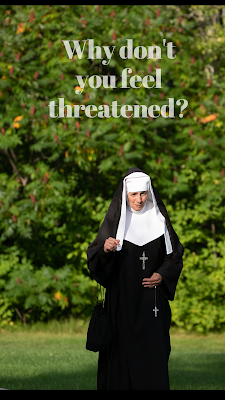 Why are some people vehemently against a Muslim headscarf but have no objection to a nun's habit? What's the difference?

The main difference is the ideology represented by the clothing. Islam's ideology is 51 percent political and only 49 percent religious. That is, 51 percent of the Koran is about what Muslims should do with non-Muslims.

A Muslim is obligated to strive to establish the law of Allah in all nations, imposing it against the will of non-Muslims if necessary. Islamic law is very detailed and specific, and includes the death penalty for apostates and gays, women are legally only worth a half a man, etc. The Muslim headscarf is one of the few visible signs of a commitment to the fundamental principles of Islam. That's why people are bothered by it.

But aren't Christians obliged to "establish the rule of Christ in all nations?" Isn't a nun's habit a visible sign of commitment to the fundamental principles of Christianity?

That's seems like a legitimate counter-argument, but are there "Christian countries?" That is, a country where the "laws of Christianity" are imposed on everyone in that country?

So far, there are 58 Muslim countries, and orthodox Muslims are dedicated to expanding that. These countries have joined together to form the largest global organization outside the UN, and they form the largest voting bloc in the UN. They have been pushing to legally impose Islamic blasphemy laws on the entire world, which means legally nobody would be able to have this conversation, even in "free nations." It would be illegal to criticize Islamic doctrine. It is already illegal in many countries.

Islam is having a huge and growing influence on world affairs. Everyone should learn more about this ideology. It isn't like other religions. The closest religion to it is Scientology, and it's not even close.

The assumptions people make about Islam are mostly wrong. But those assumptions are guiding our legal policies, and that is dangerous.

First of all, we're not talking about Muslims. We're talking about Islam, which is a set of written documents. It is a written ideology. When we say "orthodox Muslim," we mean someone who follows the principles written in Islamic doctrine. Yes, of course, there are many Muslims who do not follow the doctrine, just as there are Christians who don't follow the written doctrine in the Bible.

But what this argument obscures is that the orthodox Muslims are not misguided. They are doing what it says they must do in their written holy book. It says in the Koran 91 times that a Muslim should follow the example of Muhammad in every aspect. And Muhammad (according to biographies of Muhammad written by Muslims for Muslims) raided caravans, led battles, tortured people, ordered assassinations, and personally oversaw the beheading of 800 Jews. He captured and held slaves. He raped women. He started having sex with his favorite wife when she was nine years old. This is not slanderous rumor aimed to discredit Muhammad. This is taught with a straight face in Islamic universities, without any hint of embarrassment. This was the messenger of Allah and he could do no wrong.

A fundamentalist is one who follows the teachings closely. So the actual teachings make a big difference. And all we're saying is that the teachings of Islam are dangerous to non-Muslims. In Islamic doctrine, Muslims are the best of people and non-Muslims are the worst of creatures. This is not a conspiracy theory. This stuff is very easy to find out. You don't have to trust anyone's opinion. Just read the Koran. The Muslims who are true believers (orthodox) are counting on people not wanting to know.

In a conversation about this the other day, someone brought up a good example: the Amish. They have special dress and customs but they don't seek to impose it on anyone else. That's the difference. And it's a big difference.

Scientologists aren't bad people, by the way. Most people who read the statements above would think I was slandering Scientologists. But I was talking about Scientology, the ideology. Specifically, I was referring to the "fair game" policy of Scientology. Again, it is a written document, and followed by the true believers. It says that if someone leaves Scientology (becomes an apostate), they are fair game. They can be tricked, lied to, sued, harassed.

But that's not as bad as Islamic doctrine. Islam says the penalty for apostasy is death.

Think about something for a minute. If someone says they're a member of a group that has a written ideology, would you assume they believe in at least some of the tenets of that ideology? Of course. Otherwise, why claim your membership? It's not always the case, of course. Oskar Schindler was a member of the Nazi party, after all.

But if you could choose who would be your next door neighbor or who would date your daughter, would you voluntarily choose someone who claims membership in a dangerous ideology? They might not be "true believers." But on the other hand, many Muslims who were perfectly nice people and not true believers were reached by the more orthodox who educated them on their obligations as a Muslim. They said, "You say you're a Muslim, but have you read the Koran? Do you know what you should be doing?" And they are "radicalized" which is a politically correct way of saying they began following the written doctrine and the example of the founder of Islam.

By the way, I'm not a Christian. I'm not any religion. And I'm not out to slander any particular religion. All I did was read Islamic doctrine and biographies of Muhammad. I wasn't trying to find out that Islam is evil. I just wanted to know what was really true because we've got some people saying it's a religion of peace and some people saying it's a religion of violence. I wanted to know for myself rather than listen to the opinions of others.

I went on a decade-long program of reading, including lots of pro-Islam books and the Koran, which I read twice from beginning to end. It's a fascinating subject to study. Especially the life story of Muhammad. It is completely mind blowing that someone like that founded a religion. And that the religion (the doctrine, not the people) reflects his personality. I would never have believed it, and over time, it has become obvious to me that many people don't believe it and don't want to believe it. But if they want to be well-rounded, if they want to be an educated member of the modern world, it seems to me that one of the things they should really know about is Islam as it is, and not how they wish it was or how others want them to think about it. They should find out for themselves.

Back to the headscarf. The reason people don't like it is that the headscarf says, "I believe in the tenets of Islam" and any non-Muslim who knows what those tenets are will not like them. Also, researchers have discovered that when the women in an area with a high Muslim population begin wearing headscarves, it is a signal that the Muslims in the area are becoming more devout (more "extreme," more fundamentalist). It is a visible sign of increasing devotion to the fundamental principles of Islamic doctrine, which includes an intolerance for non-Muslims and non-Islamic laws, and usually foreshadows violence to non-Muslims and those Muslims who are "insufficiently Islamic." That's why people make such a big deal about Islamic head and face coverings. That's why France and other countries have banned them and many are considering it.

I personally think it's foolish. If you have a visible sign of growing fundamentalism, why would you ban it? To blind yourself? On the other hand, maybe it would help weaken the fundamentalism. And it would certainly help women be free of the obligation to do it in those countries.

What about the nun's habit? The answer is that being a nun is voluntary. But if a woman is born a Muslim, she is considered a Muslim and the penalty for her leaving Islam is death.

Catholic men are not likely to beat nuns if they don't wear their habits, but orthodox Muslims have been known to beat Muslim and non-Muslim women who don't cover up, and I have yet to read a report of a Catholic man throwing acid into the face of a woman because she was not wearing her habit. Orthodox Muslim men have been doing that to Muslim women in many places in the world.

People who are relatively ignorant of Islam are puzzled by the push toward banning headscarves, and would like to write it off as just ignorant bigotry. But if they looked a little deeper, they might find sensible reasons for it.